COVID and the House Dust Mite, a dangerous or deadly combination?

Synergy: the interaction of two or more agents to produce a combined effect greater than the sum of their separate effects.

Over twenty years ago a clinical study found evidence of a harmful synergy between;

These three events appeared to work together to create a risk of hospitalisation for adult asthmatics aged 17-50. In their conclusion the authors wrote: “Allergens and viruses may act together to exacerbate asthma indicating that domestic exposure to allergens act synergistically with viruses in sensitized patients, increasing the risk of hospital admission”. (1)

Of the viruses identified two were coronavirus, they were 229E, known to infect bats and humans, and OC43 known to infect cows and humans. Both can cause symptoms of a common cold in healthy people, but in the 2002 study it was a coronavirus, in combination with heavy house dust mite allergen exposure that was identified as a cause of hospitalisation for adults with asthma. (2)

A subsequent asthma study in 2006 demonstrated that the same three risk factors noted in 2002 were a cause of hospitalisation for asthmatic children aged 3-17. Rhinovirus, not coronavirus, was identified as the major contributing respiratory viral infection in children. (3,4) 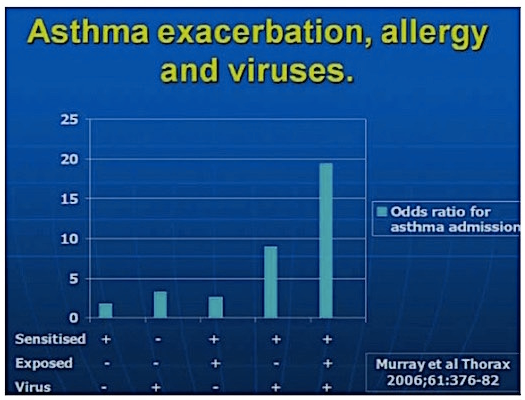 In 2007 a review by Professor Johnston on respiratory viral infection and hospitalisation noted that asthmatic lung cells, once infected with a virus, were slow to die thus giving the virus time to replicate and escape (5). If the infected cells were also exposed and reacting to allergens from house dust mites could the result be the synergy noted in the 2002 research?

Furthermore, research has noted that in asthma a neutrophil response (steroid-resistance) to allergens increases with age. This fact may be a driving force for adult asthma exacerbation and hospitalisation, or indeed asthma/COPD overlap. (6,7)

In 2017 a study on children with severe asthma and allergic to house dust mites found that the risk of hospital readmission could be reduced by installing anti-mite bedding. The study children were aged 3-17. Viral infections were not part of the investigation. Allergen avoidance was the key to reducing the risk of hospitalisation. (8)

Taken together these historic studies describe how viral infections, including coronaviruses, can impact on the asthmatic lung. They also demonstrate that excessive exposure to house dust mite allergens can risk hospitalisation in a wide-ranging age group, but it stops there.

Have the doctors missed something - a little joined up thinking is needed. Synergy, involving house dust mites and a viral infection may be responsible for hospitalisation, including those from COVID. The 2002 study indicated this possibility, but was it ever followed-up? If not, why not?

Anaphylaxis and the dust mite

COPD in non-smokers - a population larger than realized

IgG4 responses to mite and bacteria

Scientific review of the multi-faceted dendritic cell influence in asthma

Th17 cells: a new T lymphocyte and its roll in asthma.

The biology of the house dust mite

The enzymatic activity of a mite allergen (Der p1)

An important message from our researcher